Pen and brush and brown ink 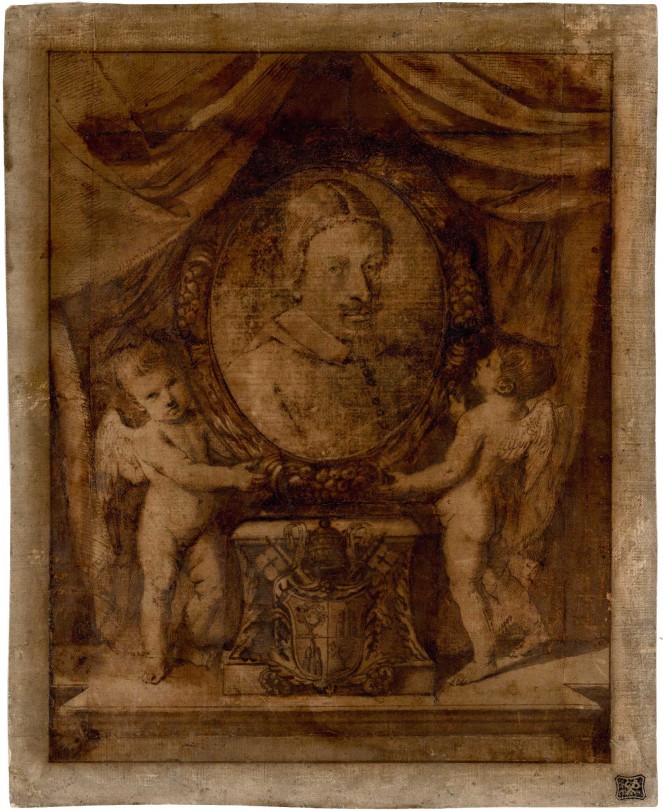 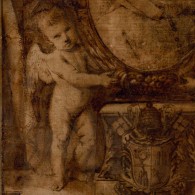 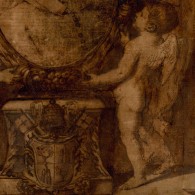 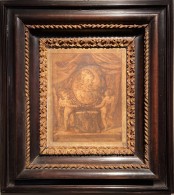 Two angels hold a portrait of Pope Alexander VII on what appears to be a kind of portable altar decorated with the pope’s personal coat-of-arms. The portrait, oval in shape, is set in an elegant frame embossed with pine cones symbolising eternity, while the curtains pulled back at the top on either side impart an illusory and sophisticated tone to the overall composition.

The drawing – very probably a preparatory sketch for a fresco that was never painted – is by the Emilian painter Giovanni Francesco Barbieri, known as Guercino. Given that it contains a portrait of the Chigi pope it must date to after 1655, the year of the conclave that elected that Sienese aristocrat to the papacy, thus to the final decade of the artist’s career. In this phase Guercino, who ran the most important artist’s workshop in Bologna at the time, appears to have been the last – not to say the last living – witness to the great season of early 17th century classicism that had flourished in Emilia and Rome. Aware of this role, and thus the recipient of prestigious commissions from all over Europe, he developed a “compromise” style in which a softness of line and an extremely free handling of light, both distinctive features of his work since the very beginning of his career, espouse the study of Roman classicism and of the work of Raphael and Guido Reni, the latter a feature found only in his later work[1].

In this drawing the portrait of the pope is based on a prototype found in a famous (and much-copied) portrait by Giovan Battista Gaulli, known as Baciccio – a portrait of which we know many versions and the original of which may be identified today as the version in the National Gallery for Foreign Art in Sofia[2]. Guercino, however, gives the pope a sterner and less amiable look than we find in Baciccio’s portrait, but then this is a celebratory image with the oval of the face superimposed on the Chigi family coat-of-arms – quartered with leafy oak trees with intersecting branches in two of the panels and with six hills symbolising the Sienese countryside in the other two panels – crowned in this instance with the papal tiara and the keys of St. Peter, both emblems of the Chigi dynasty’s only pope. The singular support, a veritable patchwork of individual leaves glued to form a composition of considerable size, points to the project’s lengthy preparation. Guercino may (though this is merely a supposition) have produced the drawing in a bid to compete for work in the decoration of Palazzo d’Accursio in Bologna, a project which got under way in  1658[3]. We know that Cardinal Girolamo Farnese, who had been appointed papal legate in May of that year, commissioned a group of artists led by Carlo Cignani to fresco the Royal Hall (now the Farnese Room) and to restore the 16th century paintings in the palace chapel. Guercino had been excluded from this group, an unexpected decision in view of the prestige he enjoyed in the city. The decoration of the room contained no reference to the reigning pope (the very man who had appointed Cardinal Farnese as his legate) but a bronze monument to him was cast by Sienese sculptor Dorasante Maria Osio in 1660 and set up on a wall in the room to the left (known today as the Swiss Room[4]). This latter room, which was radically altered when the palace was renovated in the mid-19th century and the statue of Alexander VII was moved to the end wall of the Farnese Room, was decorated with now lost allegorical images celebrating the pope, but we have no indication that there were any portaits of the pope frescoed on the walls. That said, it is absolutely plausible that there may initially have been more than one design for the room’s layout and that Guercino reasonably intended to leave his mark on this important cycle after having unexpectedly been debarred from the group working on the Royal Hall.

In any event, the drawing under discussion here is far too elaborate and sophisticated a work for it not have been intended for use in some important project, And indeed the iconographical theme of angels holding the portrait and coat-of-arms of the pope is a subject of an official nature first developed by Gian Lorenzo Bernini in Rome in 1656 with his two standard-bearer angels beneath the organ in the south transept of the church of Santa Maria del Popolo. Guercino, an artist who had been commissioned work by fully four previous popes, wished to use his talent to celebrate the historic moment marked by the personality of the Chigi pope, and this wonderful drawing has survived as a testimonial to that wish.

[1] A daunting number of studies have explored Guercino’s career as a painter, while only a smaller – albeit considerable – amount of work has been devoted to his output as a draughtsman. The various monographs on the topic include the now historic volume edited by Denis Mahon and Nicholas Turner on the drawings in the Windsor collection and the catalogue of a more recent exhibition held at the Morgan Library in New York: D. Mahon, N. Turner, The drawings of Guercino in the collection of Her Majesty the Queen at Windsor Castle, Cambridge 1989; Guercino. Virtuoso draftsman, ed. J. Marciari, exhibition catalogue (New York, Morgan Library, 4 October 2019 – 2 February 2020), New York 2019.