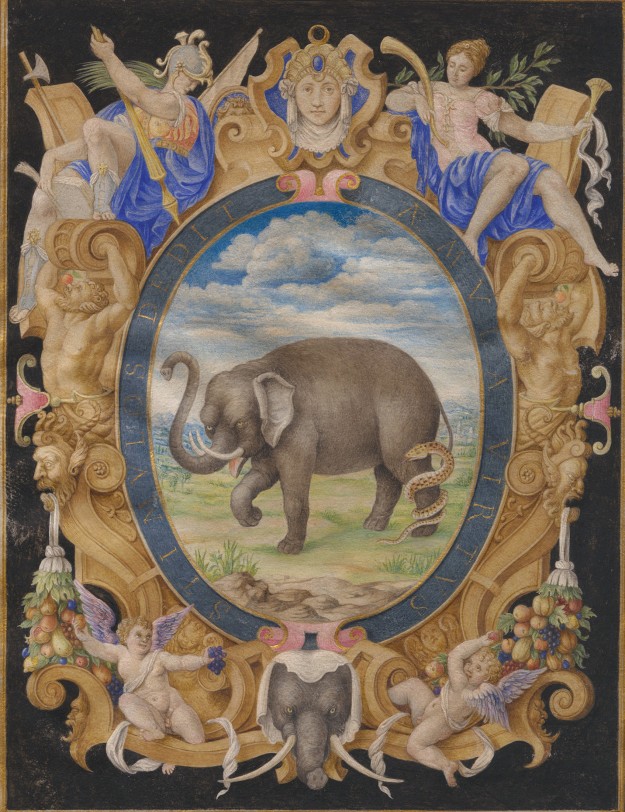 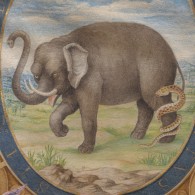 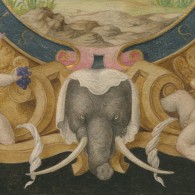 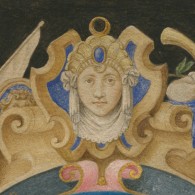 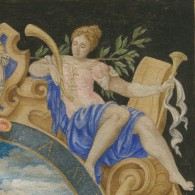 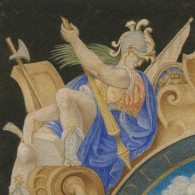 A small-scale white elephant proceeds triumphantly to the left, in a landscape illuminated by a smooth light. A snake is clinging on to his rear paw with its coils and tries to obstruct his stride.

The hidden meaning of this splendid parchment, a testimony of mannerist culture and of its debts towards Roman classical antiquity, is to be found in the motto inscribed on the frame border within which the scene is portrayed: ‘STIMULOS DEDIT AEMULA VIRTUS’. This sentence is inserted within a verse (120) of the First Book of Pharsalia(or De bello civili), the epic poem by Marcus Annaeus Lucanus, dedicated to the dispute between Caesar and Pompey and, more broadly, to the Roman civil wars of the I century BC.

Here, Lucanus illustrates the motivations which sparked civil wars, focusing on the figures who had stemmed Caesar’s ambitions (Marcus Licinius Crassus, his own daughter Giulia, wife of Pompey) and whose deaths are considered the triggering events for the beginning of the war by the author.  Lucanus believed that the imitation of courage and boldness on the battlefield sparked a crescendo of hostilities at the hands of military commanders; it was precisely because of this crescendo that the basis of Roman Civilisation itself risked falling to pieces.

The image of the elephant walking unflappable, almost without noticing the snake threatening his stride, hints however to verse 732 of Book IX in the Pharsalia, which talks about the horrible death of Cato’s soldiers, attacked by snakes in the Libyan desert: ‘nec tutus spatio est elephans: datis omnia leto’ [‘Despite their immense size, elephants are not safe either: surrender everything to death’].

The theme of the fight between an elephant and a snake has been reiterated several times in literature – including the poetic digression by Antoine de Saint-Exupéry in the episode marking the meeting between the aviator and the little prince – meaning that nobody can feel utterly safe, when confronted with inner disagreements within a state, and even more with wars.

Considering the unrest of this assumption, the iconography of our parchment can be explained from another point of view: the small dimensions of the elephant and the lifted S-shaped trunk hint at an image often repeated in Rome in the XVI century, that is the portrait carried out by Giulio Pippi, called Giulio Romano, of the Annone Elephant. The story of this famous animal, stemming from Ceylon and arriving in Rome in 1514, is a symbol of the most prolific season of the Renaissance in Rome, as well as his sudden and sad end (Bedini 1997). Annone was a small white elephant, donated to Pope Leo X by the King of Portugal, Manuele di Aviz, when he was elected Pope. According to legend, Annone – whose name paid tribute to the Carthage general, as he was the first elephant to reach Italy since Hannibal’s times – had been carried in triumph amid cheering crowds as far as Castel Sant’Angelo, in the presence of the newly elected Pope, in front of whom it kneeled three times, much to the amazement of bystanders. ‘Adopted’ by Leo X and put under the care of Giovanni Battista Branconio and Raphael, Annone lived in the Belvedere courtyard for two years, and the Pope regularly paid visits to him. His death in 1516, when he was only seven years old, aroused emotion in the entire city and hinted at the transient nature of fortunes and life itself. Annone represented a successful pact between man and nature; the sudden death of the elephant was interpreted as the first of a series of low-spirited omens, which would have befallen Rome and the entire Christendom.

As stated above, this parchment is based upon a series of studies by Giulio Romano, documented in a famous sheet (previously attributed to Raphael), now in the Ashmolean Museum Collections in Oxford (in particular, the figure to the right in the drawing is substantially replicated: M. Welzig, in Giulio Romano1989, pp. 262-265). These studies were useful to Giulio for the representation of the Battle of Zama, now lost, but known to us thanks to an engraving by Cornelis Cort (Sellink 2000, pp. 92-93, nr. 196) and a copy by an anonymous Roman master of the second half of the Cinquecento, now at the Pushkin Museum in Moscow (Markova 2002, I, pp. 203-205, no. 116). The excellent figures decorating the frame – sibyls à la Michelangelo, telamons, big masks from whose mouths fruit trophies are hanging, winged puttis – bear the signs of the figurative cleverness of Pippi, although they testify a settling of various cultural references and thus imply a chronological dating around the middle of the century.

Another elephant, seen frontally with the long tusks and small, piercing eyes, closes the series of decorations in the lower frame: here, too, we find a reference to Annone (Raphael had already used the portrait in several decorations of the Vatican Logge). And yet the docile animal, sung by poets and celebrated in a comedy by Pietro Aretino in view of his nature and near-human intelligence, is here transformed into a wild animal displaying a threatening look: the season of rationalism and the unbreakable pact between man and nature had clearly given way and new, incumbent apprehensions were looming.