Tempera and gold leaf on parchment 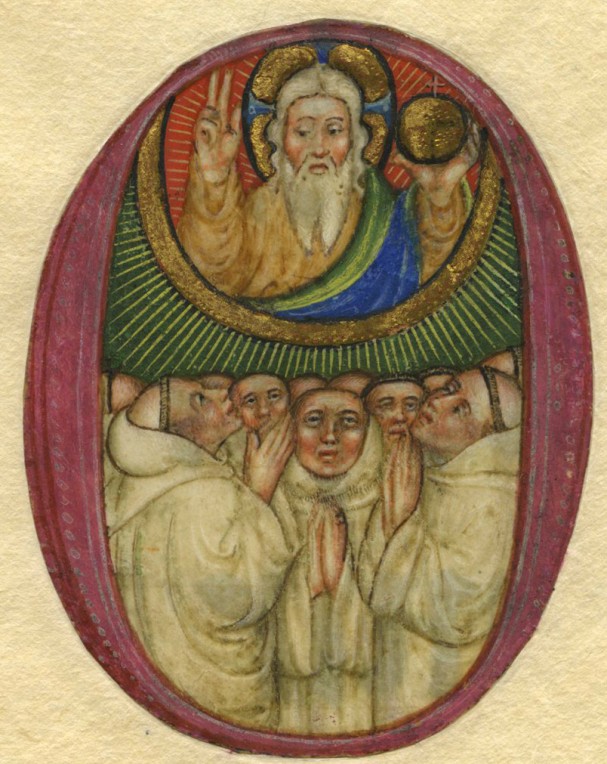 This section of the page of a codex features a decorated "O" initial: in the upper part there is a medallion with a blessing God the Father holding in his hand the orb and cross; a group of Olivetan monks, recognisable thanks to the tonsure and the white habit they are wearing, turns to him in prayer; upon them, a beam of rays, representing the blessing and divine approval of their rule. The illumination is unreleased, yet it can easily be attributed to Girolamo da Milano, better known among the critics with the conventional name of "Olivetan Master" . The individuation of this important artist, documented between 1429 and 1449 in the monasteries of the Congregation of Mount Olivet of Baggio (Milan), Quarto (Genoa), Venice, Padua, Bologna and Lodi, was one of the most discussed matters, in the studies on the illuminations of the Po valley, of the last fifty years. The issue rose from a group of three illuminated initials (a D and an L conserved in the Pierpont Morgan Library of New York and a C formerly in the Hoepli collection in Milan and today in the collections of the Cini Foundation in Venice), coming from different codices and formerly attributed by Pietro Toesca and Meta Harrsen to the Master of the Vitae Imperatorum. He was one of the most important figures of the Lombard illuminations at the beginning of the fifteenth century, which was connected to the models of Giovannino de' Grassi and Michelino da Besozzo, and parallel in its formal development to Belbello da Pavia. In 1969 Alison Stones , in a famous contribution on the Burlington magazine, isolated in the wide catalogue of the Master of the Vitae a stylistic group, indeed including the Morgan and Cini illuminations, which featured different characters, a greater plastic vigour in the drawing and a multiplicity of sources of inspiration (among which is first and foremost the Master of the Book of Hours of Modena). The new figure, defined in Stone's essay, was named "Olivetan Master" due to the inscription on the centre of the Cini illumination with the date 1439, certifying the hand of a "frater mediolanensis ordinis Montis oliveti". In more recent years, Anna Melograni suggested with solid arguments that the artist was "frater Jeronimus miniator de Mediolano", who took his vows in the monastery of Santa Maria of Baggio in 1429 and then quickly travelled throughout the Po region in the following two decades it was, after all, custom for the olivetan monks to change cenobium once a year. The importance of this illuminator, proved by the many documentary testimonies of his passage in the various monasteries, perfectly fits the value of the illuminated pages of the Olivetan Master, starting precisely from the Communion of the Apostles inserted in the C initial of the Cini Foundation. We can relate only a complete codex to Girolamo's catalogue (a Rule of Saint Benedics formerly in the Bodleian Library in Oxford, today in a private collection ), in which a great number of cuttings can be included nonetheless. Our parchment, for instance, can be connected to another fragment, conserved in the Bibliothèque national of Paris (Cabinet des Estampes, Ad 132 res., f. 32) and assigned to the group of the Olivetan Master by Ilaria Toesca . Also in this case it is an O initial, also illuminated with the God the Father's blessing of the Olivetan monks. For the fragment of Paris Ilaria Toesca suggested the same origin of the initials of the Pierpont Morgan Library and of the C initial featuring King David, the Magdalene and various saints praying Christ the Redeemer, formerly in the Gambier Parry collection in London and conserved today in the Courtauld Institute of Arts. The smaller dimensions and the different characters don't allow us to suggest for our page the same origin of the above-mentioned fragments, although the formal similarity with the parchment of Paris and with Christ's baptise inserted in the D initial of the Morgan Library implies a close dating, plausibly following 1439, the year of the Cini illumination.