recto: Putti with a Banner Pole 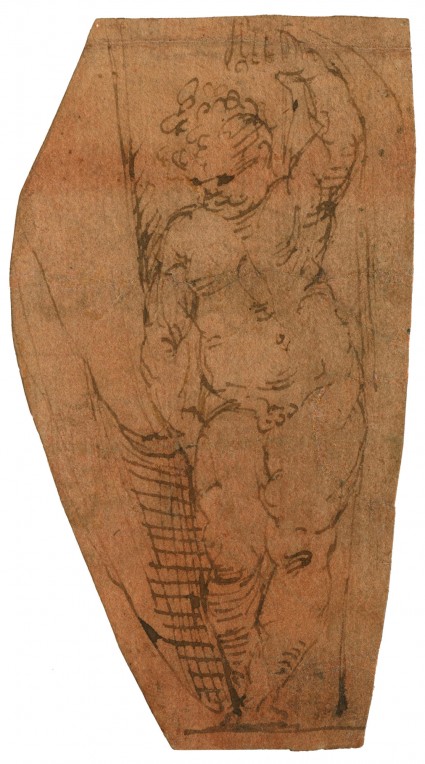 The putto's left arm is raised, he is leaning towards the right and holding an upside-down banner pole with his right hand. On the verso side of the foglio two horrible figures are walking towards the right. They look like Harpies, even though the wings of the first figure are barely visible and both figures' extremities are webbed instead of ending in claws as is customary. This is an unusual but not rare way to depict these mythological creatures especially during the Classical era.
Even though this is clearly a rapid sketch, the quality of the drawing is surprisingly high. It is clear that the hand that drew it is that of a great Master, one who is capable of giving a Tuscan interpretation to influences that came from Northern Italy and specifically from Lombardy. Both the monsters and the rotund profile of the putto clearly show the influence of Leonard's genius and of the inheritance that he left his school in Lombardy. The putto also shows signs of anticipating "anticlassical" (to use the term so cleverly coined by Antonio Pinelli in his famous book) trends that were so important at the beginning of the epoch of Andrea del Sarto. Clearly, this is just a stylistic comparison that is based principally on the poetry of the image as a direct comparison is not possible, but this figure seems to be inspired by the figure of Christ and Saint John the Baptist in the Madonna with St. Catherine and Elizabeth that is in the Hermitage today, a work of art that is amongst the best in del Sartos' work at the end of the second decade of the 1500s .
Certainly, the stylistic elements are sufficient to attribute this foglio, one of the masterpieces of this show, to Domenico Beccafumi. This Sienese painter, in fact, is the only Master in the first half of the 1500's who unities these influences in his work. His long apprenticeship, first in Siena with Pinturicchio, then starting in 1510 in Rome to study the frescos in the Sistine Chapel and in the Stanza della Segnatura, and then, after a time in Florence, again in Siena, in the painter called Sodoma's workshop, gave him a style that was practically unique in the entire Italian cultural panorama and makes his work immediately recognizable.
Other artists that share the artist born in Montaperti's openness to the pictorial traditions mentioned above, and above all the Sienese painter Giorgio di Giovanni, never seemed to have reached the heights of artistic quality that this foglio so evidently demonstrates. On top of that, the putto on the recto side can be quite pertinently compared with others in sketches attributed to Beccafumi by some of the best specialists. Such is the case with several Groups of putti in the Cabinet des Dessins at the Louvre (especially the one with the inventory number 10757 ) or with another Group in the Gabinetto degli Uffizi (inv. 1650 ORN). The Uffizi also have a famous sanguine sketch by Beccafumi (inv. 1270 F) with a San Giovannino which is extraordinarily similar to our sketch by for the drawing style and for the incredible quality of the composition as a whole .
Another interesting hypothesis comes when the Putto with a Banner Pole is compared with a figure on the right hand side of a medium-sized painting, a Putto with a Medallion today in the Chigi Saracini collection owned by the Monte dei Paschi in Siena . The pose is the same with very little variation such as the head looking slightly lower in the drawing. And the date must be about the same too: the painting is generally dated to the 1530s , a phase in the artist's career that the drawing on display here most probably comes from too. The absence of some important details such as the wings, that in the painting are depicted at the height of the neck, and the upside down banner in the drawing make me think that the drawing could have been a preparatory study for the another painting, whose whereabouts are today unknown, even though it could have been a study for the painting in question.
More difficult to attribute is the drawing on the verso side, probably a study done by Sodoma. The figures of the Harpies seem to recall the frescos on the ceiling of the Piccolomini Library in the Duomo in Siena, a project where Beccafumi began working as a young man. The scenes in the rectangular compartments along the longer walls, inspired by antique sarcophagi, figures drawn by Pinturicchio who left his studies to Girolamo Pacchiarotti to be finished, can be considered a probable inspiration for the drawing. In this case the drawing would be a sketch from a lesson on classical antiquities, just like the preparatory drawings for the decoration of the floors in the Duomo in Siena, finished by one of the most imaginative and ingenious personalities in all of the Italian Renaissance.