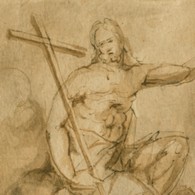 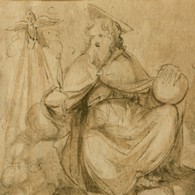 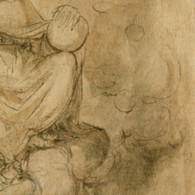 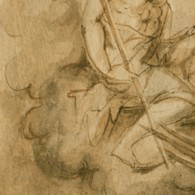 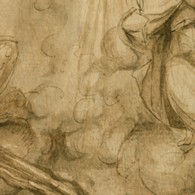 Sitting on clouds are the Holy Father, with the orb and sceptre in his hands and a triangular nimbus on his head, and Christ holding a cross and pointing upwards with his left arm. In the centre the Hoy Spirit in its traditional form: a dove that emanates a cone of light.
The figures are all identifiable by their attributes: Chirst is with a cross, signum salutis of humanity; the Holy Father with his triangular halo which symbolises the dogma of the Trinity, the orb and sceptre which allude to the Final Judgement. The sceptre, orb and the cone of light emanating from the Holy Spirit allude to the three moments of the passage from life on earth to eternal life: judgement, salvation and illumination.
This interesting foglio, for which we haven't been able to find a certain attribution, was probably done by an artist from the Lombardy region in the first quarter of the XVIIIth century. The morphology of the figures recalls Parmigianino, especially his frescos in Santa Maria della Steccata in Parma. The elongated figures and their serpentine form are proof of a revival of northern Mannerism, a revival that more than in Emilia, a region that during the seventeen hundreds was still tied to Bolognese traditions from the century before, was strong in Lombardy. An interesting hypothesis would be to suggest that this drawing was done in Mantua towards the beginning of the century: in that city, which in 1707 passed from the rule of Ferdinando Carlo di Gonzaga Nevers to that of the Hapsburgs, a reflection on the work of Correggio and even more so of Parmigianino was started by the Parmese painter Giovanni Canti (1653 - 1716). There are very few drawings attributed to Canti up to now, even though he was maestro of two of the most important Mantuan painters in the early Seventeen hundreds, Giuseppe Bazzani and Francesco Maria Raineri called lo Schivenoglia, and famous mostly for his battle scenes. Without a doubt it is he who drew the attention of painters from Mantua in the eighteenth century towards the evocation of the poetry of Mannerism from the Emilia Romagna region. It could be therefore that, if the dating of this foglio remains within the 1720's and admitting that its quality does not allow it to be attributed to the greatest painters of the day, (and one could think of lo Schivenoglia), a reference within a reasonable margin of error to the circle of the head of the Parmese school, whose activity in Mantua was also important, thanks to many commissions from religious institutions.