black and red chalk on paper 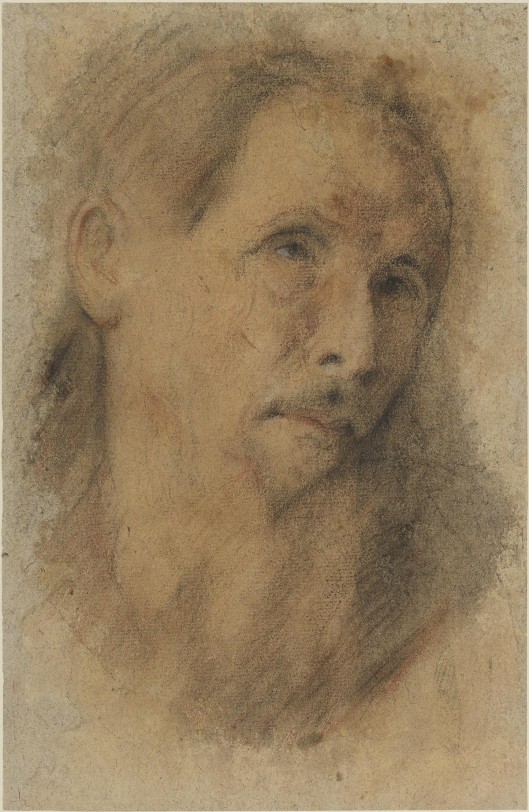 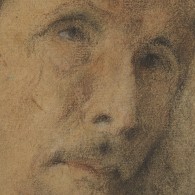 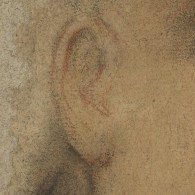 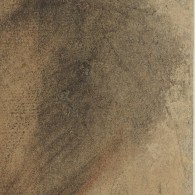 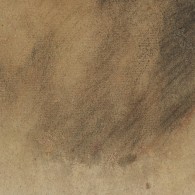 The thoughtful face of an elderly man emerges from a blurry background. A decidedly strabismus in his left eye makes his gaze, facing upwards, decidedly piercing and evocative. His erratic, melancholic profile sets this physiognomy study alongside the “character heads”, which had become customary in late XVI century Italian graphics[i].

This extraordinary sheet, formerly in the collection of the Milanese art historian and playwright Giovanni Testori, has been identified as a preparatory drawing for the figure of Saint Gerontius in the altarpiece depicting the Virgin and Child with Saint Mary Magdalene, Gerontius and the Donors, executed by Federico Barocci, with the considerable help of his apprentices – for the Confraternita della Misericordia in the Church of Saint Francis in Cagli[ii]. The work, now at the Pio Sodalizio dei Piceni in Rome, exemplifies the relationship that had been established between the master and his Marche workshop: the invention and composition lied with Barocci, as shown in the extensive amount of preparatory drawings for the various figures of the painting – certainly autograph works by the Urbino painter. His apprentices were instead assigned the painterly depiction of the model, carried out following a style that would closely resemble that of the master. Based upon such observations, modern historiography excluded the finished work from the Barocci output – alternatively attributed to Antonio Cimatori called il Visacci and Ventura Mazzi[iii]; and yet one is greeted by the sheets referring to the painting, authentic masterpieces exemplifying his graphic acumen, these days kept in the most important museum collections in the world, none the less (the Uffizi Gabinetto dei Disegni e delle Stampe in Florence, the Albertina in Vienna, the Louvre Départment des Arts Graphiques in Paris and the Ashmolean Museum in Oxford).

The excellence of immediacy and truthfulness, typical of the male and female head studies by Barocci – and identified as representative of his graphic output already by XVII art scholars[iv] –, are fully visible in the present drawing; his elaborate technique, obtained with the use of pencil, coloured chalk, watercolour and faint heightening, in no way detracts from the speed of execution, as if the sheet were betraying the master’s disposition as an anticipator, with regards to the pastel virtuoso of later eras. One may even compare the realism of this figure of an old man, replete with soul, with a cinema snapshot, so much so that it is easy to see how this sheet met the refined taste of such an exegete as Testori, and his friend and companion Pier Paolo Pasolini would have certainly appreciated it, as well.

We see a precipitous frame, not unlike other sumptuous head studies by Barocci – we may first of all include the Oxford Ashmolean Museum drawing (inv. 0222) that Andrea Emiliani put in connection with the same figure of Saint Gerontius[v], but also several sheets depicting Heads of Apostles, now at the Uffizi Gabinetto, or the famous Female Head at Windsor Castle – that comply with the artist’s habit of asking the models in his workshop to hold the most spontaneous countenance, freely changing positions as they wished.

In other words, even before Carracci, Barocci discovered the authentic, impulsive value of life drawing: he shunned the sophistication of his contemporaries to regain the creative zeal of the great mannerist artists.  For this reason, Barocci bears witness to an undergoing revolution: the suggested dating of around 1590 for this sheet, as well as for other preparatory drawings for the Cagli altarpiece, after all coincides with the same period when the Accademia degli Incamminati reformation was taking place in Bologna, and just preceded the beginning of the Roman period of Caravaggio. Far from displaying a retrospective and Cinquecento character, Barocci’s graphics presents itself as turn-of-the-century cultural avant-garde. The present drawing for Saint Gerontius thus brings about formidable evidence of this assumption.