Head of an Old Man with an Oriental Hat

pen, brush and brown ink on traces of black chalk, on white paper 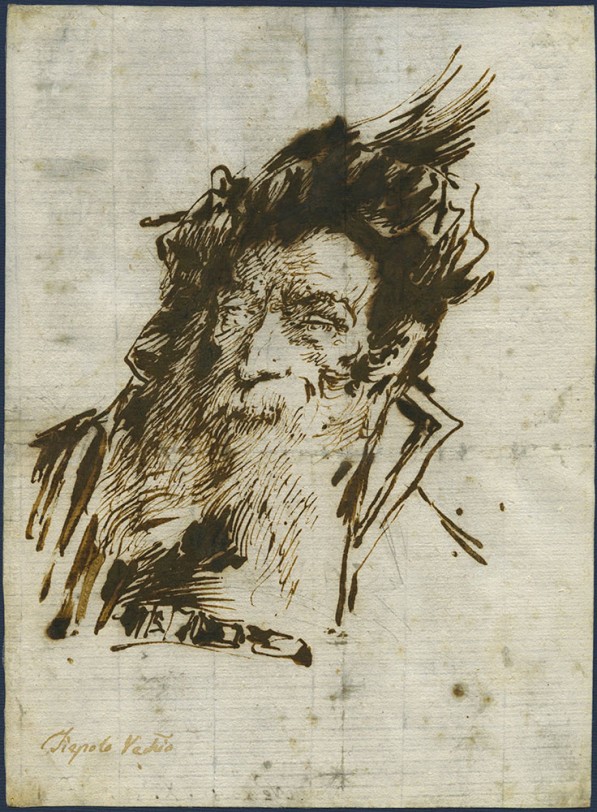 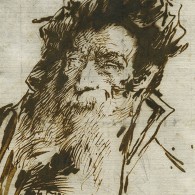 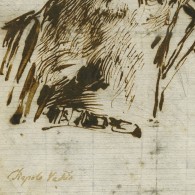 An old man, his head covered by a feathered cap, is absorbedly looking on his left. In the wrinkled face this eyes, sunken yet spry and sharp, stand out. Despite the vagueness of an invented portrait, it is clear that it is the face of a wise man, probably an unspecified philosopher.

It was Rembrandt the artist who had defined at the mid-17th century the features of this kind of artworks in some amazing paintings – lets think of the Man in Oriental Costume of the Rijksmuseum of Amsterdam, the Portrait of a rabbi of Windsor and the Portrait of an old Jew, conserved in the collections of the Hermitage, among the others – and in many and as successful etchings[i]. They were poetic and allusive images, recalling precedents in the style of Giorgione and intentionally letting unsolved the problem of identifying the subjects portrayed. It wasn’t the historical reference but rather the sense of profound empathy with the struggles, but also with the nobility, of the elderly that was supposed to capture the observer’s attention. The fact that these men were presented with features that confirmed an Oriental origin, made their figures even more alluring and enigmatic, bearers of an unknown knowledge and therefore “philosophers” par excellence. Mainly as consequence of the spreading of etching, in Italy these imaginary portraits fascinated many painters, making them adopt to what was becoming a subcategory of the so-called “character heads”. Among these masters – and as we will see this is an extremely important reference for our drawing – the most faithful interpreter of Rembrandt’s prototypes is without any doubt Genovese painter and drawer Giovanni Benedetto Castiglione, also known as Grechetto (1609-1664), a real link between the Nordic models and the Italian taste, for his ability in translating into a pictorial and musical sense the synthesis of the light passages impressed on the sheets by Rembrandt and his direct pupils[ii].

Our drawing belongs to the following century and is part of a considerable group of works (paintings, drawings, etchings), by now unanimously attributed to Giandomenico Tiepolo. The Portraits of philosophers, attributed in the past to the hand of Giovan Battista, were afterward subject matter of researching, among the other studies, of George Knox[iii] and Christina Frerichs[iv], who managed to correctly attribute them. Actually, Knox postulated the existence of an original group of paintings by Giambattista Tiepolo, translated into etchings by the son Giandomenico starting from 1757[v]. The prototypes of the maestro, sometimes properly identified by Knox in person, would have originated a large production of Giandomenico, eager to enter Venice’s market after the splendours of Würzburg and the beginning of his own activity. The success of the painter’s initiative, who had by then reached the age of thirty, is manifest in a 1757 letter from Anton Maria Zanetti the Elder to Pierre-Jean Mariette[vi]: “Dieci, o syne undeci, delle adietro scritte Teste non sono che uscite dall’acquaforte, et non ancor vedute, se non da voi, da me, et dalla famiglia Tiepolo. Vi confesso il vero, che a mio certo intendere, ve ne sono alcune, quali, se potesse uscire dal sepolcro il Remb[randt] et. Gio. Benedetto Castiglione, baccierebbero chi li ha fatte” (“Ten, or maybe eleven, of the previously mentioned Heads just out of the acquaforte, and still unseen, except by you, me and the Tiepolo family. I will admit the truth, I believe that some of them, if Remb[randt] and Gio. Benedetto Castiglione could stand from their sarcophaguses, they would kiss who made them”). The reference to Rembrandt and Grechetto is much more important since it came from Zanetti, that is the 18th century major European collector of etchings made by the Dutch master. As for Castiglione, he was by far the most appreciated Italian engraver of that time in Venice, to such an extent that his creations were translated in new states by artists of the calibre of Gaetano Zompini[vii] (the cycle of twelve Capricci commissioned by Zanetti in person) and Alessandro Longhi[viii]. Besides, it seems that with the grammar of his Heads drawings Giandomenico wants to emulate in the quickness and at the same time in the variation of the chiaroscuro passages, the peaceful tone of Grechetto’s sheets, without of course renouncing to the solemn depth of Rembrandt’s shades[ix].

It looks like our drawing wants to start precisely from one of Castiglione’s most famous Small portraits: the etching featuring the Man with a long beard, wearing a plumed turban[x]. Tiepolo uses a nervous and vibrant hatching to reproduce the effects of etching and give the face a moved expression. Yet Giandomenico is knowingly detaching himself from the mannered style of his model. The black signs that are enclosing in his drawing the shape of the face give the subject a more vivid feature. The light, moving without sudden accelerations to show the profile of the figure of Grechetto’s etching leaves in Giandomenico’s sheet space for much more vigorous chiaroscuro passages and to a brightness that becomes impulsive and very rapid. In other words, we can say that the difference between Castiglione’s etching and Giandomenico’s drawing is the figurative experience of Giovan Battista Tiepolo, pivotal in the 18th century painting throughout Europe. Besides, in the incipit of the monograph dedicated to Giandomenico, Adriano Mariuz[xi] inserts all of the artist’s career between the two opposed poles of the father’s painting and the Neoclassicism. In our beautiful drawing, made after the artist’s incredible apprenticeship that was his stay in Würzburg, the considerations for the ancients clearly cannot do without the veneration of the style of his father.

It hadn’t been possible to find among Giandomenico’s Heads of philosophers identified by Knox and by the following studies any canvas for which our drawing can be considered as preparatory study. Yet many references imply that it could have been a first idea for the painting conserved today in the Art Institute of Chicago (afterwards copied in the canvas conserved today in Palazzo Thiene in the Banca Popolare di Vicenza collections).