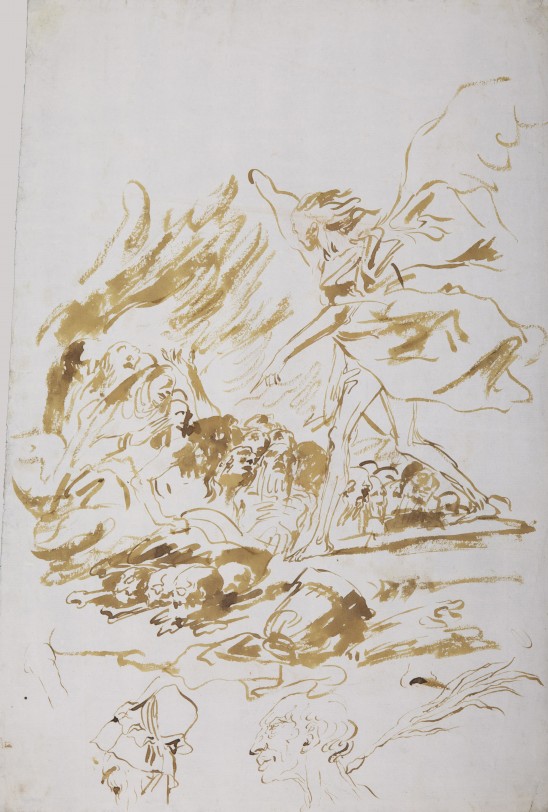 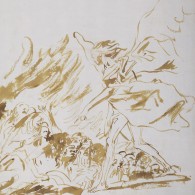 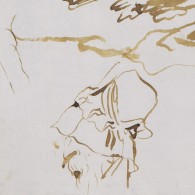 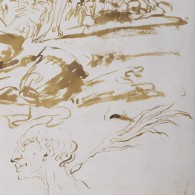 This quick yet exceptional drawing looks like a page of notes. In the lower part, two heads in profile: the portrait of an old man, depicted as a Roman senator, and of an old man with barely outlined features and beard whose head is covered by a Phrygian cap. In the central and larger part of the sheet, a quite unusual holy subject: Saint Michael Archangel descending to Purgatory to release the redeemed souls.

The iconography of Saint Michael choosing and releasing the souls from the flames of purification to take them to Heaven doesn’t appear on the canonical texts, but derives from the liturgical tradition: since the Archangel is empowered to evaluate the weight of the souls and of their sins at their death, he is worshiped for the salvation of the dear departed. It is no coincidence that this iconography had developed especially after the Counter-reformation, when stating the value of the daily liturgical practice was for the Roman church as important as reiterating the Gospel narrative. Despite without a written origin, such sequences have been codified by the prayers of the believers and therefore could be inspirations for important altarpieces. These stories could be connected to the memory of a saint close to popular devotion and that could therefore be a means to evocate Saint Michael or the Virgin (such as the Saint Gregory painted on Sebastiano Ricci’s altarpiece for the church of Sant’Alessandro della Croce in Bergamo). Or more infrequently the subject could be depicted autonomously, with Saint Michael Archangel as sole protagonist of the scene (such as the well-known canvas by Jacopo Vignali in the transept of the church of San Gaetano in Florence)[i].

Bernard Aikema attributed our drawing to the rich graphic corpus of Giandomenico Tiepolo. The historian ascribed it to the artist’s early works, in the years immediately following his return in Venice from Würzburg and the beginning of his own activity. As known, Giandomenico’s drawings correspond quite rarely to finished artworks: they were mainly exercises on models painted by the father. Collectors considered them as autonomous artworks due to Giambattista’s increasing fame in Europe and to the artistic value that had already been recognised to the qualities of the eldest of his sons; therefore, they were highly regarded by the market[ii]. Besides, in his youth Giandomenico’s role in the paternal workshop was indeed to copy his father’s drawings to satisfy the on-going requests of merchants and admirers. When the young artist received the first important commissions, from the canvas cycle with the Stations of the Cross for the Oratory of the Cross in the church of San Polo in Venice (1747), to the fresco of the presbytery of the church of Saints Faustino and Giovita in Brescia (1754), the drawings made for the market and derived from subjects of Giambattista’s works didn’t decrease at all[iii]. Besides, Giandomenico was building a great reputation by continuing to use the style he had developed during his long apprenticeship in contact with the paternal artworks. In a 1753 praise letter, the prince-bishop of Würzburg, Johann Philipp von Schönborn, commends Giandomenico’s talent, stating that thanks to it he would one day became “in the beautiful art of painting a true copy of the original, that is, His virtuoso Father” [iv]. Again in 1762, when he was about to leave for Madrid at the age of 35, the unknown author of the Compendio refers to his just as a “much diligent imitator” of Giambattista’s manner[v]. The closeness to the model, which was a necessary condition also for his etchings, represented the distinctive sign of Giandomenico’s art: in our drawing, the figure of the Archangel derives from the figure of the fresco of The appearance of the angel before Sara of Palazzo Arcivescovile in Udine[vi], even if the cloak’s hems blowing in the breeze rather recall the silhouette of the angelical figure of the ceiling frescoed with The coronation of the Virgin in the church of Santa Maria della Pietà in Venice[vii], made around 1754-55; it can therefore reasonably represent a relevant chronological term of comparison for our drawing – lets not forget that the father made Giandomenico work on the fresco throughout from beginning to end. The figure in profile on the lower right – the old man depicted as a Roman senator – is instead a faithful replica of the doubled face of the two souls to whom the angel is showing the scapular, in one of the canvases – the one on the right of the larger one featuring The appearance of the Virgin before Saint Simon Stock – of the ceiling of the Sala Capitolare at the Scuola dei Carmini, also in Venice[viii]. Giandomenico, who could easily access the Scuola due to the position of authority that the father had reach among the brothers and who had therefore the chance to copy the scenes of the ceiling, had certainly carefully studied Giambattista’s artwork. On the contrary, the figure of the old man with the cap is less recognisable due to the vagueness of the lines.

In other words, our drawing certifies the end of his training: the moved homage of a by now mature painter to the long apprenticeship spent next to an impressive parent. Besides the usual quality of the narration, which makes him a more modern and affable drawer than Giambattista, apparently Giandomenico is not at all anxious to free himself from the paternal teachings. At the turn of the mid century, in a time that was quickly pacing towards the enlightened rationality, affirming of the magnificence of the last great master of the Italian school was already assuming the aspect of a melancholic and retrospective elegy.