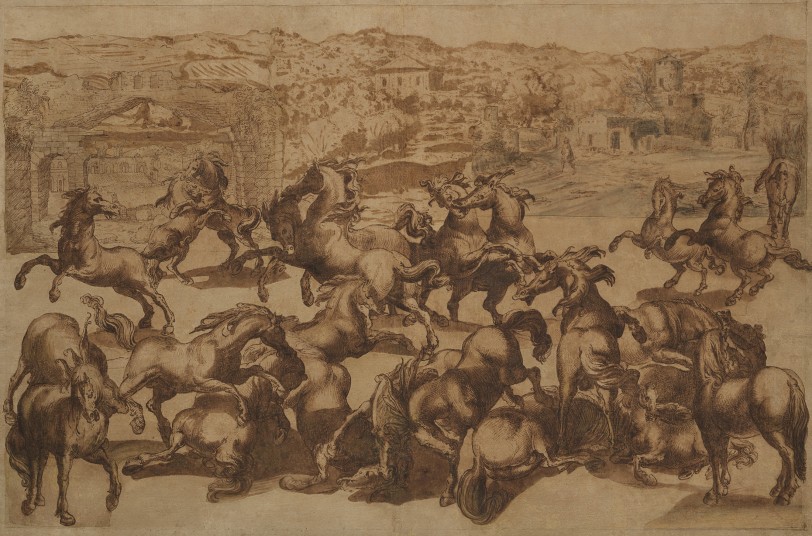 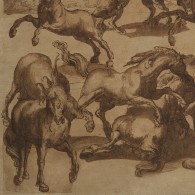 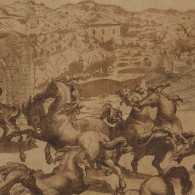 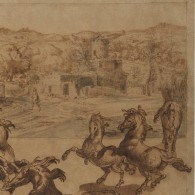 A throng of horses is battling in front of the gate of an ancient city – whose glorious past is suggested by massive ruins – on a hillside. A wayfarer is peacefully walking in the woods towards the farmhouse without realising what is happening a few meters far from him, hence highlighting the contrast between the heat of the horses on the foreground and the untroubled calming landscape behind them.

The author’s long meditated executive method for this extraordinary drawing alone confirms its exceptional value: it is made of a series of drawings that have been individually elaborated and then glued together on a cardboard. This resulted in a collage on which the artist then continued drawing in pen and paintbrush in order to conceal the executive difficulty of such a project. This means reveals the cultural background of our drawing: in chapter XXVI of the First Book of The Courtier, Baldassar Castiglione writes: “I find one universal rule, which seems to me worth more in this matter than any other in all things human that are done or said, and that is to avoid affectation to the uttermost and as it were a very sharp and dangerous rock; and, to use possibly a new word, to practise in everything a certain nonchalance, that shall conceal design and show that what is done and said is done without effort and almost without thought. From this I believe grace is in large measure derived; because everyone knows the difficulty of those things that are rare and well done, and therefore facility in them excites the highest admiration”. The aim of art is to pretend nonchalance instead of showing the elaborate structure and difficulties, in other words to make something that is actually complicate look simple: in our drawing the value of the artist is in the confidence of the project’s development and in the mastering of the various technique (pen, aquarelle, black and red pencils are visible). This drawing was made at the end of the Renaissance, and it seems that the great mastery of one of the highest moment of the European culture is being passed down through our artwork.

Our drawing can undoubtedly be assigned to the Flemish painter Jan Van der Straet (commonly known as Giovanni Stradano), who began his training in Antwerp and was active for over 50 years in Florence in the service of the Medici court from the years of Cosimo I to those of the Grand Duke Ferdinando. This attribution is supported by the tangible similarity between the profiles of the horses in the foreground and those of a smaller study today part of the collections of the Uffizi showing his signature (inv. 863 Orn. See A. Baroni Vannucci, Jan van der Straet detto Giovanni Stradano: flandrus pictor et inventor, Milan 1997, pp. 261-262, n. 368). The study of the Uffizi collection belongs to a series of sheets, made by Stradano, that had to be reproduced in etching by Hendrick Goltzius and Adriaen Collaert for the volume Equile Ioannis Austriaci Caroli V. Imp. F., dedicated to the horses of Don John of Austria, son of the Emperor. The Flemish painter depicted the horses live and then complicated their poses rethinking them in unnatural twists, close to the coursers of the battle scenes he had frescoed in the rooms of Palazzo Vecchio. As far as the style is concerned, Stradaro is the perfect representative of the Mannerism: the explosive energy of the drawing, inspired by Michelangelo and Leonardo’s models, becomes the formal feature of his art and assumes an autonomous value – and this incredible collage of re-used sheets must not be considered as a preparatory study, but as a finished artwork to display and sell. The nervous pen line and the vivid highlights made with a brushstrokes and diluted ink show the devotion of the Flemish master to the Tuscan tradition, from Rosso Fiorentino to Vasari. And yet as said in the contrast between the foreground and the background there is an extremely typical concept of the Renaissance and the Neo-Platonism. The horses’ feral violence represents the challenges of the existence on Earth, and therefore the challenges of the body; on the contrary, the peace of the landscape in the distance, which has been humanized and ennobled by ruins, towers and farmhouses, reveals the peace of the spirit that, just as the wayfarer, is apparently walking away from the torments of life. These are the same years of Michelangelo’s last considerations written in his Rhymes: and it seems that sheets like ours reveal the same mood, elevated with contrasts, of the poem “Well-nigh my voyage now is overpast”.