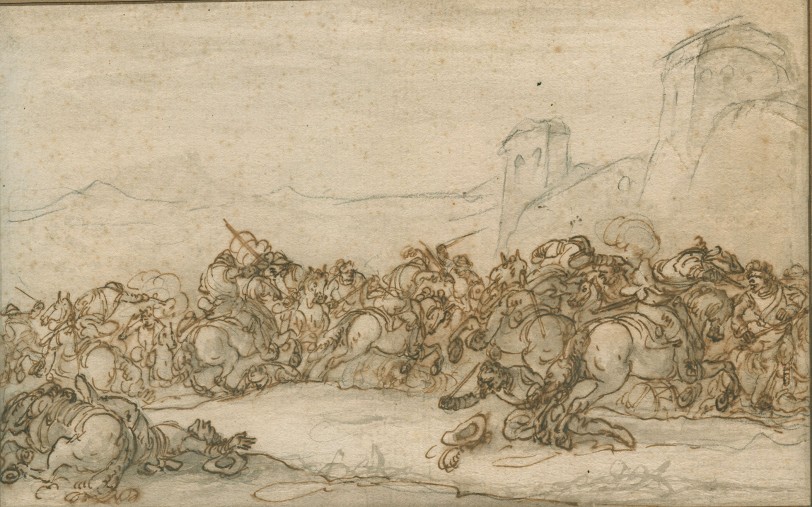 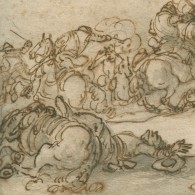 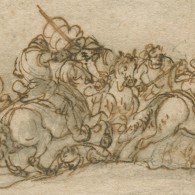 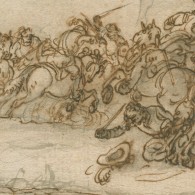 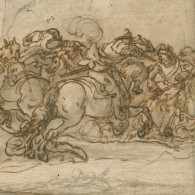 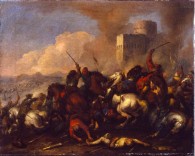 The knights from two armies are engaging in front of the bastions of a fortified city, in a landscaped enclosed on the back with mountains: five brave captains, depicted from behind, are attacking the enemies, which are superior in number yet scattered almost as if they had been taken by surprise by the fury of the paladins.

This beautiful drawing, datable around 1720, depicts a deliberately fairy-tale war scene set several centuries before: in a time when armies had been engaging with artillery fire for a long time, a fight between knights – and it is interesting to recognise in the figures from behind the profiles of Christian warriors and in the scattered throng the Muslim army – appeared as melancholic and literary. The author of this elegy, which features a vigorous graphic pen stroke balanced by the finesse of the aquarelle shading, can be identified in Francesco Simonini, born in Parma and active mostly in Florence and Venice during the first mid-18th century.

The artist, who probably is the most famous battle painter of the Italian 18th century, was one of the favourite authors of Count Johann Matthias von der Schulenburg, at first field marshal of the Imperial armed forces and then ambassador of the Republic of the Serenissima. In his youth Schulenburg had won several battles against the Ottoman occupation in Hungary: Simonini, who was employed as an artist in the service of the Count, celebrated the glory of the marshal in a great number of battle paintings and drawings, which as a result were mainly set in Balkan landscapes. As for our drawing, it finds a precise correspondence – especially in the poses of the figures, basically reproduced – in the battle painting today part of the collection of the Fondazione Cariplo (Tesori d'arte delle banche lombarde, Milan 1995, p. 197), and it might have been its “first idea”. The presence of the citadel protected by towers enclosing the scene on the right, while on the opposite side the landscape extends into the distance, is a peculiar feature of our artist, depicted in many paintings and drawings (above all the famous Carovana di soldati, today part of the Bosoni collection in Milan).