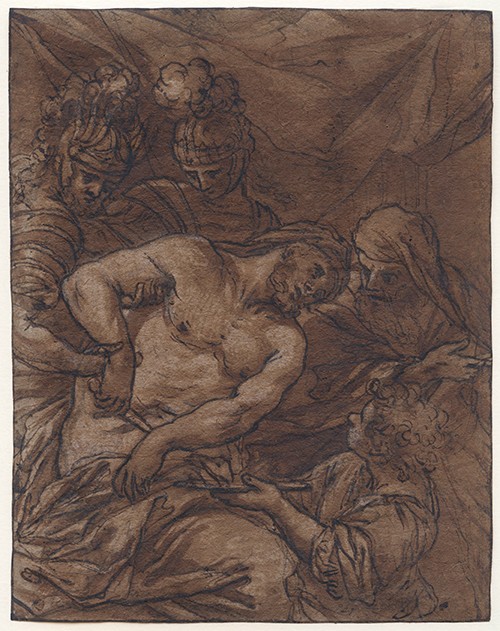 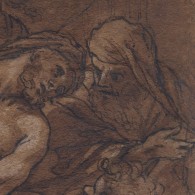 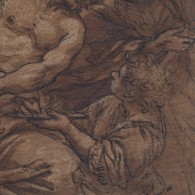 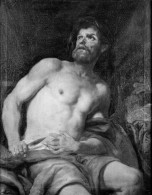 Cato’s sacrifice is taking place in front of the mountains surrounding the city of Utica, not far from ancient Cartago: two loyal Roman legionnaires are trying to stop him, while an old servant and a young man are rushing to help him.

The suicide of the statesman, unwearying supporter of the Republic’s institutional prerogatives against Pompey and Caesar’s attempts on hegemony, has been considered a model since the Middle Ages – Dante portrays Cato as the guardian of the Purgatory –, embodying in an historic figure the highest civic virtues. As a consequence, since the 16th century painters have been representing Cato at the moment of his death as an example of extreme bravery, coherence and rectitude: in cabinet paintings, often commissioned by statesmen, Cato becomes a source of inspiration in political activities, and the stoicism he shows when facing his death stands out also in modern times as the greatest moral mastery. For this reason this iconography is widely represented in the 17th century, not where the power is managed by a sovereign and his court (the figure of Caesar, of whom Cato was a fierce enemy, could more easily be considered as a source of inspiration for the power of a monarch), but rather in the presence of a patriarchy respectful of the ancient republican institution: for instance, the iconography of the suicide of Cato can be found especially in Genoa and Venice.

Our impressive drawing can be easily attributed to Johann Carl Loth, painter born in Bavaria. Son of artists – his father Ulrich was one of the first baroque painters between Frankfurt and Munich, his mother a refined miniaturist –he moved to Venice at twenty years old, adapting his style to the models of Titian and Tintoretto, and to the artistic experiences that had been developing in the lagoon since the mid-17th century. Bernarso Strozzi’s paintings and Luca Giordano’s Venetian altarpieces particularly represent the young master’s preferred formal references: as far as the construction of the scenes is concerned, Loth develops a very theatrical rhetorical quality; this is close to the precedents of the paintings in the style of Caravaggio in Rome and a tangible equivalent – in the choice and representation of the subjects – of the texts of the classic tragedies written in those years in Venice and Northern Italy (by the authors of the librettos of the incipient melodrama and Carlo de’ Dottori, for instance).

Loth depicted in many paintings the sequence of the Suicide of Cato: in particular, the canvas of the Musée Crozatier in Le Puy-en-Velay in Alvernia[i], the painting of the Villa Sale di San Damiano Curti in Sovizzo Basso near Vicenza[ii] and a third one, previously part of the Wieniawski collection and today part of the collections of the Muzeum Narodowe in Warsaw[iii]. These three artworks are quite similar (to such an extent that a chronological proximity has been suggested, dating the paintings between the 1660s and the beginning of the following decade) and are all relevant to our drawing: they all display the same number of characters and their disposition, and the expedient, of course in the style of Caravaggio, of depicting the young servant always in front of Cato – who in the meantime is hitting his own stomach with the dagger – to highlight the intrinsic proximity between the observer and the dismayed bystanders, first of all the young man. The pose of the protagonist is always different – in this regard the painting of Sovizzo Basso is the most similar to our drawing –, fully representing the modus operandi of Loth, an amazing drawer: before painting on a canvas, he used to make several studies in order to decide which one could be reproduced in the various versions. Yet the richness of the graphic corpus does not diminish the quality of the drawings; they feature the same precision of the final artworks precisely because the studies had to be reliable tests of the rhetorical quality of the compositions. The overlapping of the different techniques (underneath the pen, the aquarelle and the white lead we notice the large use of pencil) confirms how much the drawings were planned and meticulously realized. Of course, the force of the outlines isolating the profiles stands out, increasing their dramatic vigour. The frenzy of the chiaroscuros shows that this drawing was made in the 1660s, when the model of Giovanni Battista Langetti still dominates Loth’s art. The German painter will later turn towards a more mediated manner, which instead of tending towards the pathos was closer to the melodious nature of the mature baroque.