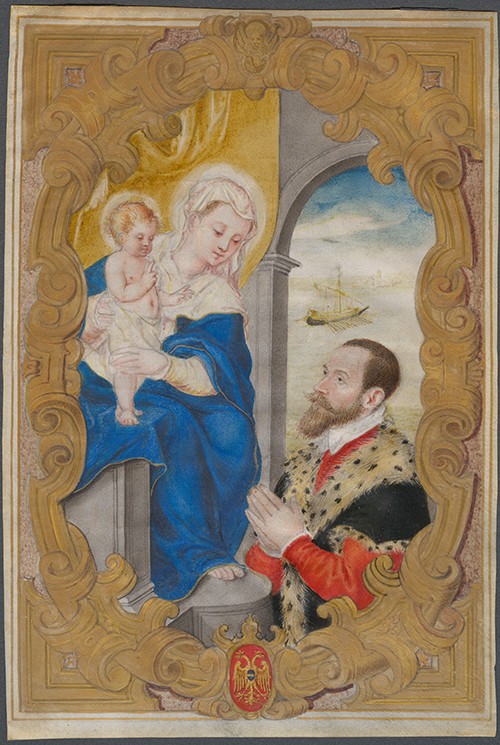 A Venetian gentleman, dressed as a Senator and wearing a fur, is praying the Virgin and the blessing Child; behind him, in the distance, a galley is sailing towards a fortified city, of which we can glance a bastion and, in the middle, the profile of a bell tower.

An inscription in capital letters is on the verso of this illuminated parchment: it reads the reasons for the redaction of what was supposed to be an encomiastic volume – and our page represented an unbound heading sheet – made for the designation to an unspecified position of the gentleman praying on the front. To write manuscripts commemorating the election of members of the Senate to political positions on behalf of the Repubblic was common practice in Venice between the 15th and the 17th century[i]: some of these illuminated volumes, who intrinsically bear not only artistic but also historical value, are conserved today at the Museo Correr Library, but obviously many of them, at the end of the Most Serene, had dispersed on the antiques market[ii]. As a consequence, nowadays these manuscripts, also called commissione dogale since it was the doge to order their writings, are widespread among libraries and museums throughout the world. Sometimes, and it is our case, the volume got lost and only the first parchment with the titling, showing the votive image of the addressee, was conserved. At times, the addressee was represented with the eponymous saint, yet he was more often alone, praying the Virgin, begging her for protection in the position he was about to cover.

On the lower and upper part the gilded frame with spirals presents two coats of arm: the lion of Saint Mark is at the center top, while at the bottom a double-headed eagle on a red background represents the Giustinian noble family. Therefore the person represented can be identified in an important man of the dynasty. Now our investigation into the gentleman’s identity has to take into consideration the inscription on the verso: the name of the represented man is missing, but as said it refers to the designation to a position, decided by the council of Pregadi and by doge Pasquale Cicogna (1509-1595): “NOS PASCALIS CICONIA DEI GRATIA DUX VENETIARUM ET C. HAVEMO PER SCRUTINIO DEL CONSEGLIO DE PREGADI E COL NOSTRO MAGGIOR CONSEGLIO FATTA ELETTIONE DI TE DILETTO NOSTRO” (“By the grace of God, our Pasquale Cicogna, doge of Venice, and us all, with the assessment of the Council of Pregadi and with our major counsel we have elected you our dearest”, in ancient Italian). Fundamental for the identification of the subject is the scene depicted on the bottom: the city towards which the Venetian galley is sailing is Candia, capital city of the island of Crete, conquered by the Venetians at the times of the Fourth Crusade and strenuously defended from the attacks of the Ottoman fleet until 1669 (and we have to remember that when duke of Candia doge Pasquale Cicogna led the navy forces of the island at the1571 battle of Lepanto)[iii]. The commissione of Cicogna has to be connected to the investiture of a provveditore of Candia for the Republic, investiture that actually took place in 1588 with the nomination of Alvise Giustinian (1522-1601). He was a prominent Senator, whose cursus honorum was quite similar to Cicogna’s as he succeeded him first as Luogotenente of Friuli and then as duke (that is military commander) of Candia. Afterwards Alvise became podestà of Padua and additional senator to the Council of Ten. The investiture to Provveditore Generale of Candia was the penultimate step of an impressive public career that would lead him five years later to the Procuratia of Saint Mark. More discrete than other elements of his family – such as the younger cousin Orsatto whose bust made by Alessandro Vittoria is conserved in Padua’s museums – never had the painters of the Most Serene portrait him in official clothing and therefore the image of our illumination can be considered as the only document showing his features.

The author of our sheet, as we said very important historical proof, is Venetian painter Alessandro Merli[iv]: known to the ancient books as the master of the great canvas with the Washing of the feet of the church of San Lio in Castello[v], Merli was subject of study by the critics especially due to his activity as illuminist. In fact, his name appears written with reference to two sheets, also representing important commissioni dogali: in the Biblioteca Marciana (Ms. It. 1350-8085) we find the Commissione del Doge Marino Grimani a Giovanni Andrea Venier, dated 1600; in the Library of the Ermitage (Inv. 14145) an unbound signed parchment featuring another commissione of doge Grimani to an unrecognizable senator[vi]. Based on these two evidences, a small corpus of illuminations whose features are easily recognizable was gathered: Merli was a follower of Titan and Veronese tradition, yet he had a particular regard for the archaic models of the beginning of the 15th century, with a quite vivid strong interest for the Flemish tradition. It seems that his Virgin with the Child, whose proportions are smaller than the precedents of Titian, and whose characters are therefore less monumental yet more approachable, are closer to the figurative experience of Lodovico Pozzoserrato, at the center of Venetian painting at the end of the 16th century. Besides the gentlemen depicted on his sheets show a care for detail, in the style from beyond the Alps. Lastly, in the production of this fascinating master the decision to use this rich gilded raised framing with spirals can be found in many of the compositions corresponding to ours.