recto: The Martyrdom of Saint Paul Miki and Companion

verso: St. Jerome in the Desert, and Studies oh Heads 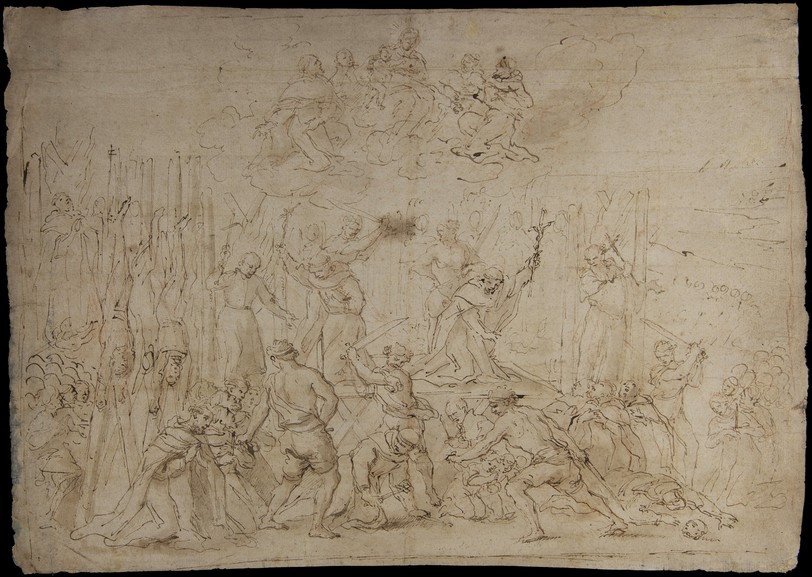 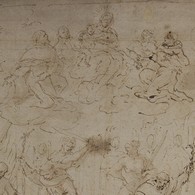 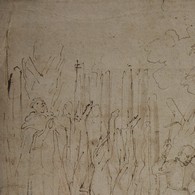 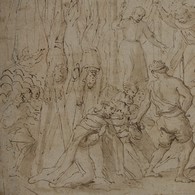 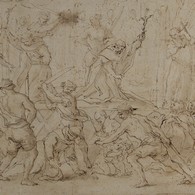 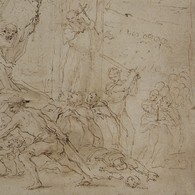 We would like to thank Nicholas Turner for confirming the attribution, on a written communication dated 17th December 2012

The story of Paulo Miki and Nagasaki’s martyrdom on the 5th of February 1597 was given prominence when, thirty years later, pope Urban VIII declared the canonisation of twenty-six churchmen, crucified on the Shogun’s order, in the capital city of southern Japan[i]. Considered spies by the European powers, they formed an heterogenous party of three Japanese jesuits - among which Paulo Miki, that in the stories of the martyrdom takes the lead of the whole community – six Spanish and Portuguese friars Minor and seventeen Third Order franciscans, all of them Japanese. The churchmen’s different origin is the reason why in Europe the martyrs’ worship was connected to the order of friars Minor conventual rather than to the jesuits. However there are quite sporadic representations of the historical event, the saints seem to be always wearing franciscan habits: for instance, on Tanzio da Varallo’s canvas, one of the first iconographic attestation today conserved in Milan's Pinacoteca di Brera[ii], once decorating an altar at the franciscan convent of Varallo's Santa Maria delle Grazie, or Francesco Maffei's large altar piece made for Schio's San Francesco's church[iii]. On both, the churchmen are attached right-side-up to traditional crosses, almost as if the similarity of this martyrdom with the one suffered by Christ may allude to San Francis, “alter Christus” by definition. Instead, in the drawing here presented the churchmen are nailed up-side-down and to Y-shaped crosses. This anomaly can be explained through the superposition of a new worship, connected to other Japanese martyrs, mostly augustinians, persecuted at various times during the first half of the Seventeenth Century. Particularly moving was the story of Saint Mary Magdalene of Nagasaki, killed precisely on a Y-shaped cross and sometimes represented wearing a monk's habit with the other Magdalenes (for example, Andrea Sacchi's canvas, today in Rome's National Gallery of Ancient Art).

This drawing was attributed as a piece of work the Roman painter Ludovico Gimignani by Nicholas Turner (written communication). Son of Cortona's school painter Giacinto, rather than training by getting in contact with the father's style, since his very first youth Ludovico built a worthwhile relation with those artists moving around Bernini, also taking part to some of the famous artist's decorative undertakings, such as the new Collegiata of Ariccia's Santa Maria Assunta, for which he paints when he was only twenty-something years old one of the altar pieces (the Rest during the flight to Egypt)[iv]. Maybe less talented under the forms' solidity point of view compared with the father, Ludovico distinguishes himself for the richness of his suggestions, the variety in his models - sign of his long apprenticeship and of his long stays in Italy's Padania and Venice – and the rapidity of the trace, manifest especially in his remarkable graphic corpus. He is the author of various designs of monuments, fountains, sepulchres, showing us how much he was valued by Bernini (there also is a project for his burial made by our artist) and his pupil sculptors.

Given the lack of direct confronts in the wide number of drawings recognised as his works, we are not able to accept tout court Turner's hypothesis; yet, we can consider it as a suggestion, and actually a really pertinent one. In fact, if not in the single passages, it is in vibrant character of the whole composition, featuring nervous lines, that we can appreciate the comparison from some of Gimignani's drawings, such as Turno's death and especially Scipio's continence, from Rome's National Institution of Graphic Arts' collections[v]. The sketchy tracing of the figures, defined practically only by the contour line, contributes to the expressive immediacy to which sometimes the author sacrifices the story's clarity. It is not an accident that the saint's figures encircling the Virgin with the Infant in the upper part are unrecognisable: we are able to guess Francis and Ignatius of Loyola's physiognomy, yet not the others' that remain blurred. What is important for the author is to convey the excitement of that mournful event, enhanced by the relation between the bodies' motion lines and the crosses' boards, at right angles to the ground. The insight of the so gentle watercolour heightening allows to stress the strong sign of the pen, proving the nearness with Padania's Seventeenth Century's models.

Saint Jerome's figure on the back appears to be closer to a Roman influence, next to Giacinto Brandi and, as Turner noticed, to a famous etching by Pietro Testa[vi]. Less simple to value are the three profiles, although in the one on the upper part we can clearly see the research made by the author on Guido Reni's figures' physiognomy and in this case on various Heads of the apostles – that anyway represented by the end of the Seventeenth Century a model for all of the Italian schools – is tangible.