A Youth Turning Round Holdin a Book, with a Putto on his Left

Pen and brown ink on paper 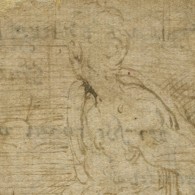 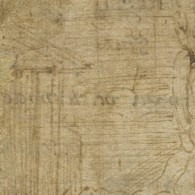 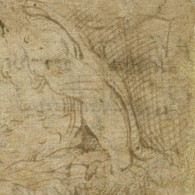 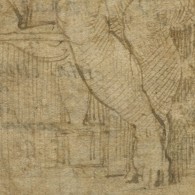 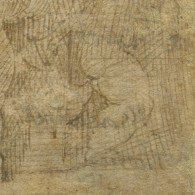 A young man, semi nude and with very marked muscles, is depicted in profile, sitting on a bench. He is holding an open book with his right hand, while his left hand is resting on the back of a Putto, seen from the rear. The young man is turning towards the portico of a classical temple, while on the background the profile of a battlemented tower stands out. Since it is not outlining a definite subject, the drawing is rather qualified as a Mannerist study of figure: the surprising feature is the profile, for many aspects still relating to Michelangelo, of the young man whose body is depicted in three-quarter and whose neck is turned around. The sketched pshysiognomy represents therefore the very first origins of that serpentine shape which will constitute the peculiar feature of Mannerism. The very high quality of the drawing, the multiplicity of the formal suggestions and the subtile bright vibration given by the very light trace of pen give no rise to doubts on its authorship: it clearly is one of the masterpieces of the early graphic production of Parmigianino. Besides, despite having been displayed quite recently (it was on the market in 1992, purchased by US poet Stanley Moss: Christie's, Manson & Woods Limited, Old master drawings: the property of the late Samuel Messer and from various sources, 15 December 1992, lot 55), the drawing was later published in all the registers of the works by the Parmesan master, from David Ekserdjian's contribution (1999), intended already in its title as a "supplement" to Popham's text, to Achim Gnann's volumes (2007).
Historians had greatly discussed on the issue of when to position the drawing in Parmigianino's career. Ekserdjian was in favour of a quite early dating: he traced the drawing back to 1520-21, close to the altarpiece of Bardi's Santa Maria delle Grazie, hence before the frescoed works of San Giovanni Evangelista's church in Parma. On the other hand, Maria Cristina Chiusa moved its execution up to 1527, after his stay in Rome and therefore at the beginning of the Bolognese period. It is easier to agree with those, from Mary Vaccaro to Elisabetta Fadda, who have seen in the frescoes of San Giovanni the most pertinent elements of comparison: these frescoes can be placed between the end of 1522 and the first half of 1523, just before the works of Rocca Sanvitale in Fontanellato. The impressions from Michelangelo and Sebastiano del Piombo, but also from Pordenone's fresco for the counterfacade of the Cathedral of Cremona, are in this phase Parmigianino's favoured source, even more than the heritage of Correggio, his direct master. In the rotation of the young man's bust we perceive the same sense of dynamism and energy we find in the figure of San Vitale in the second chapel on the left of San Giovanni; and the profile of the arm on the foreground is just as comparable. Also the drawing proposed as term of comparison by Mary Vaccaro, the Study of a sitting nude of the Louvre's Dèpartement des Arts graphiques (inv. 6432v: A. E. Popham, Catalogue of the drawings of Parmigianino, New Haven 1971, I, p. 145, n. 410, II. pl. 64), can be related to the same phase, indicating a disposition of Parmigianino towards Michelangelo and his heritage, of a few years before the beginning of his Roman stay.
This is not a detail of little importance: if in Italy the period of Mannerism starts with Michelangelo's expressive experimentation on the ceiling of the Sistine Chapel and on the sculptures of the tomb of Julius II, the fact that these work-manifestos had more or less immediately an impact in various areas of Italy, even on authors that weren't in Rome, undoubtedly proves the unifying value for the Italian culture that these texts were able to boast. On the other hand, the fact that an only 19-year-old Parmigianino shared this exchange is the demonstration of the absolute importance that his figure had already gained well before completing his training period with his stay in Rome. The frescoes of San Giovanni, owing a lot less to Correggio's lesson than his canvas paintings made in the same years, express the precocious emancipation of the young Mazzola from his master and his tradition. Our drawing can therefore be considered, as only few other drawings, to be the statement of a poetics that, outside the borders of the Po Valley, wants to affirm itself as a natural continuation of modern Mannerism in Rome and the rest of Italy.