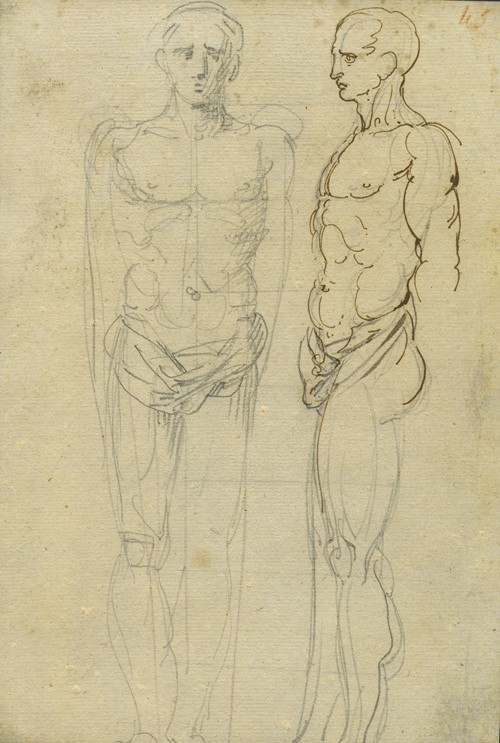 A male figure is represented standing, in front and in profile, in his majesty. On the back a group of men, dressed with Classical clothes and long mantels, is carrying on a litter the lifeless body of a young woman. The drawing appears as a study sheet for different compositions. The figure on the front, who in his facial features seems to hide a tribute to Antonio Canova, is probably preparatory for the fresco decoration of a room. It is an anatomical study, in pencil and pen, of Classical inspiration, with quick yet at the same time erudite lines. The back is instead preparatory for a religious painting, probably the Exequies of saint Lucy: the scene features a plain and solemn atmosphere, far from any gesture exasperation and instead close to the composure of the funeral ceremonies of the ancient times. The author is easily recognisable in Giuseppe Bossi, painter born in Busto Arsizio, yet adopted Milanese, one of the key personalities of the culture and art in Italy during the Napoleonic period. Apprentice of Appiani in the Brera Academy and appreciated in his youth mainly for his ability in writing verses, his long stay in Rome during the last years of the Eighteenth century was fundamental: he met with Angelika Kauffmann, Felice Giani and Antonio Canova. His balanced style, obtained through his studies of David, Girodet and Gerard, managed to get him to gain the favour of Italian and French clients and to reach, when he was 24 years old, the important office of secretary general of the Brera Academy. In this beautiful drawing we are at this specific phase, at the turning point of the century, probably right after he came back to Milan from Rome. The echoes to Canova's graphic are manifest, just as, in the Exequies scene, the study of the masters of the Classicism of the Seventeenth and Eighteenth century in Rome (the figure in the forefront on the left seems to be borrowed from Poussin). And it is the interest in paintings and drawings of the previous centuries that allowed Bossi to form one of the most important Italian collections; at his premature death in 1815, this would become property of the city of Milan and of its cultural institutions.