recto: Venice, View of the Piazzetta Towards the Island of San Giorgio Maggiore 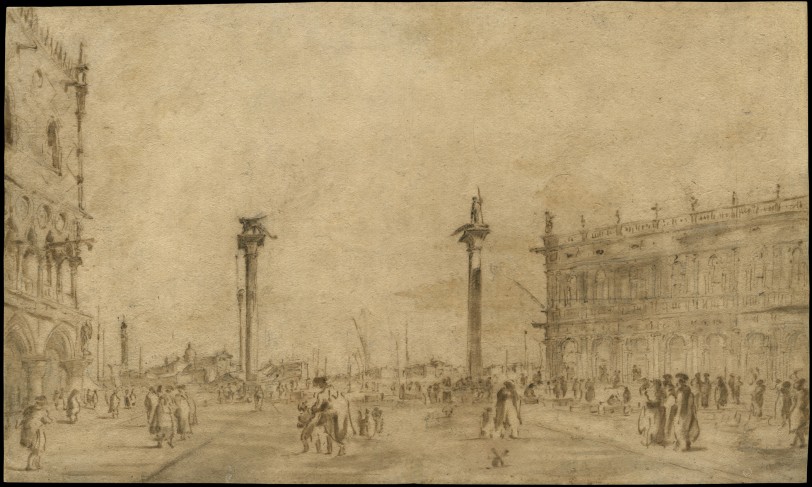 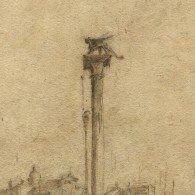 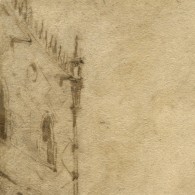 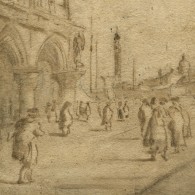 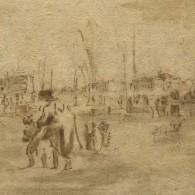 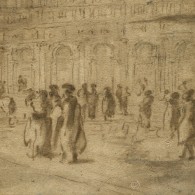 Carefully traced in detailing the buildings and from a wide-angle prospective, the View of the Piazzetta towards the island of San Giorgio Maggiore is an unpublished version of a subject that has been variously elaborated by Francesco Guardi (Venice 1712 - 1793), the last and unequalled interpreter of the great season of Eighteenth Century Venice's genre of landscape.
Two other graphic versions of the view are known: the first one is part of Venice's Correr Museum's collection (pen and sepia inked paintbrush, grey paper, 228x269 mm, inv. n. 1196) . Terisio Pignatti considered this copy as "one of the most typical example of Francesco's scornfully hasty style, made more evident by the paintbrush's tip on quite rough paper, unsuitable support for such a technique". The scholar assimilated the sheet to the large group of landscapes belonging to the painter's late career (last two decades), yet considering its iconographic and stylistic features, it is more likely that the landscape dates back to the 1760s, Francesco's genre of landscape's "young" period.
The Hartford's Wadsworth Atheneum Museum of Art's drawing (pen and aquarelle on paper, 248x381 mm; Morassi 1975, n. 335, pic. 337) has a different layout: Morassi describes it as "a beautiful sheet, featuring bright strokes of the tip of the pen, entirely permeated by clear brightness, to be dated back to a ripe age". This version is very close to our view, though there are differences in the characters' disposition on the foreground on the right. Our drawing stands out for the aquarelle ink's painting effect of the shadings creating a vibrant play of chiaroscuro, enhanced by the paper porosity and the traces of the passing of time, caused by the handling of the sheet, used as model for following painting works and, maybe, for the Wadsworth Atheneum's more free version as well.
There are three painted versions of this view; the earliest, part of a Parisian private collection, according to Morassi dates back to the 1760s (canvass, 31x52 cm, Morassi 1973, n. 369, pic. 394). A second version (Paris, private collection, canvas, 25.5x43.5 cm, Morassi 1973 n. 368, pic.395) is dated back by the scholar to 1775-1780, while the third one, part of Wadsworth Atheneum's collection (canvass, 46x99 cm, Morassi n. 366, pic. 396), was considered as "work of the painter's ripe age, roughly dating back to 1770-1780, of an excellent quality".
The painting's chronology suggested by Morassi appears to be completely in line with our drawing's dating around the second half of the 1760s when Francesco Guardi had already been experimenting with the productive period of the amazing and poetic lagoon views. In shifting from the Canaletto's style of the early landscapes to the elegiac and meditative transposition of the urban and lagoon prospective, Francesco Guardi defines his poetics by broadening the landscape aspect in order to enhance the extent of panoramic view by suspending the urban landscape between the vastness of the expanse of water and the limitless sky. In our drawing the Piazzetta becomes an open space where the Libreria and the corner of the Doge's Palace, carefully outlined, are a sort of aerial architectonic wings around the indefinite extension of the city towards the horizon, creating a particularly painting effect in rendering the light of the sky, vibrant over the imaginary little characters animating the Piazzetta.
The 1765-1768 dating suggestion of our view is confirmed by the drawings on the back of the paper, used vertically; on the upper part, there is a partial view of Saint Mark's Basilica's facade and of the Doge's Palace from a standing point of view under the archway of the Clock Tower. We do not know of a painting version of this view, vaguely recalling Canaletto-style prospectives. The wearing of the paper does not allow to read the background with Saint Mark's basin, and its interpretation is limited also due to the superposition of some vases, featuring exquisite rococo taste, whose trace dates back to Francesco's style in the 1780s.
Quite interesting is the View of the Grand Canal with the New Factories in the lower part, clearly associated with the lower left part of Milan's Pinacoteca di Brera's homonymous canvas assigned by Morassi (1973, n. 562, pic. 538) to the transition period between the Canaletto-Marieschi's style to Guardi's own one, rich in the chromatic mixture, roughly dated back to 1760-65. In the file of the preparatory drawing (representing only the left part of Brera's painting) purchased by Vienna's Albertina in 1924 (pen, sepia ink aquarelle, 269x245 mm; Morassi 1975, n. 378, pic. 379), the scholar states that it is a fragment of a sheet, clearly of wider dimensions, permeated of a brightness enhanced by the contrast with the shades on the palaces' facades. Roughly dating 1760-70. The scholar specifies that Byam Shaw had already recognised in this sheet the preparatory drawing for the right part of Milan's Pinacoteca di Brera's canvas.
It is plausible that the other half is our drawing, as the stylistic and technical affinities show and since, by joining our drawing with the left part of Albertina's sheet, we have, with the exception of a small lacuna in the centre, the complete preparatory drawing for Brera's canvas.
The prospective structure and the style of the views on the front and on the back of our sheet confirm its dating back to the second half of the 1760s, the same years of the two painted versions (Parisian private collection, Morassi n. 369; Milan's Pinacoteca di Brera's painting, Morassi n. 562) which our sheet is closely connected with.