Saint Leonard of Noblac and Episodes of his Life 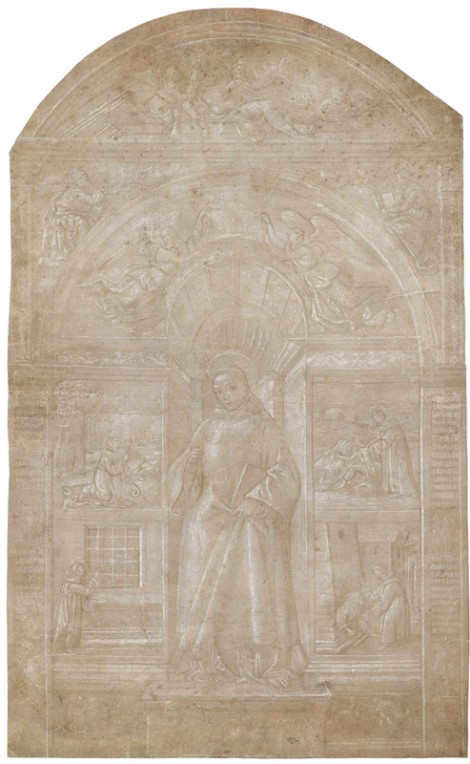 Saint Leonard, in a model-like pose that recalls performing art, walks along a ledge in front of a niche that has been prepared for him. Behind him, and surrounded by angels with wreaths, prophets and a Deposed Christ in a lunette, there are four episodes from his Life, a Temptation and three Liberation of the prisoners, that sum up the cult of this hermit saint.
Leonard was, and even today still is, the patron saint of the imprisoned. The distinctive element of his iconography is chains, as you can see here in this drawing, where with his right hand he indicates stocks, the forerunners of handcuffs. This distinctive characteristic of his cult, which has enlarged in the industrial age to include miners, comes from a fundamental episode in his earthly life: Leonard, who was born at the end of the fifth century, was baptized by Saint Remigio of Reims. When he managed to convert Clodoveo and the Franks to Christianity, the king, amongst the other privileges he granted to the archbishopï¿½s clergy, gave Leonard the privilege to free all of the prisoners he came across in his pilgrimages that he considered to be innocent. In the scene in the upper left Leonard is in his hermitï¿½s cave, defending himself from the Devil, in the lower part he seems to be pulling a grate off of a window and in the two scenes on the right hand side he is freeing a prisoner who is chained to a boulder near a river and he is leaving an underground prison through a crack in a tower.
The cult of this saint who was born in Orlï¿½ans was particularly strong during the Crusades, a period when many rulers were imprisoned by the enemy and who then prayed to the saint for freedom. Such is the case of Boemondo dï¿½Altavilla, prince of Antioch, and later of Richard I of England, both of whom were followers of the Saint because they had been held prisoner for long periods of time in the Holy Land and were amongst the first to later take pilgrimages to Saint Leonard de Noblatï¿½s monastery. In the early 1100ï¿½s relics of the body of the saint were brought to Cerretto Guidi near Florence, and this brought a wide diffusion of holy buildings dedicated to his memory all throughout Tuscany .
This drawing, amongst the most important in the show both for quality and historical value, was most probably a preparatory drawing for a large and grandiose altarpiece. This altarpiece was probably never painted as there are no references to it in documents. One can deduce that it was a piece intended for the main altar in a church in the countryside by the fact that the scenes depicted are also accompanied by long captions that describe the episodes portrayed. This custom was considered obsolete in the largest cities in the second half of the 1400ï¿½s. The importance of these drawings was such that the artist copied their entire contents in the preparatory drawing that therefore also becomes an exceptionally valuable historical document, even more so because after the 1300ï¿½s the iconography of the saint was not included in other important paintings .
While it is certain that this drawing belongs to a central Italian cultural context and should be dated to the first quarter of the fifteenth century, it also clearly recalls styles that were popular in Umbria in the early 1500ï¿½s. The layout of the scenes within the general structure makes one suppose that the artist was influenced by compositional solutions used by Pietro Perugino (for example in the altarpiece dedicated to Saint Agostino that used to be behind the main altar of the church of Santa Maria degli Angeli in Perugia and today has been dismantled) or by Bernardino Pintoricchio (as in the altarpiece dedicated to Santa Maria dei Fossi, that used to be in the church of Santa Maria degli Angeli in Perugia and today is in the Galleria Nazionale dellï¿½Umbria). It is amongst these artists, who also worked with Pintoricchio , that the artist here in question should be collocated and this also on the basis, I believe, of one important fact: Giovan Battista Caporali called Bitte, was the son of the better known artist Bartolomeo Caporali: the first maestro who taught Pintoricchio. Even considering just the most important work done by Bitte, the altarpiece dedicated to San Girolamo, that used to be in the church of the Minori Osservanti in Perugia and today is in the Galleria Nazionale dellï¿½Umbria , one can see similarities between the quality of the drapery and also how similar the poses of the angels in the upper part are to Peruginoï¿½s work. These are also similar to the frescoed angles that hold the crest in the lunette on the back wall of the Libreria Piccolomini in the Duomo in Siena, where we know that Pintoricchio worked with the young Caporali , although it is difficult today to know precisely where each artist worked the angels have been attributed to Bitte by Pietro Scarpellini .
It is easy to believe that the artist, whose style never really changed or evolved throughout the first half of the 1500ï¿½s, was commissioned to do an altarpiece in a smaller town. In fact, throughout his career he alternated collaborations with important painters on large projects such as the frescos on the ceiling of the choir of Santa Maria done under the direction of Pintoricchio with smaller projects for paintings and frescos for country churches in the areas between Perugia and Siena. The drawing we are taking into consideration is particularly similar to the decoration done in the niche of an altar dedicated to Santï¿½Antonio Abate in the church by the same name in Deruta (Perugia) . In this case the lifelike figure of the saint in the center has been sculpted in terracotta. This same traits, had the beautiful drawing done here even been painted, would have been found in the final portrait of Saint Leonard the Hermit.