Tempera and brush on white paper 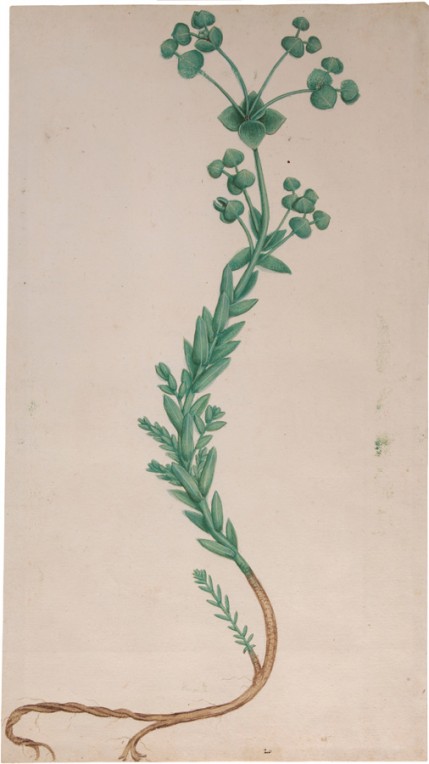 An oregano plant, not yet in bloom, is drawn here with great precision and elegance using a very light hand and tempera colors. This painting on paper was done by the artist Jacopo Ligozzi from Verona, who was Italy's most important botanical and scientific illustrator between the 1500s and 1600s.
Amongst the many revolutions that took place in the 16th century, one of the most important was the one that regarded the rapport between art and science. Not that previously artists hadn't realized the necessity of accurate and detailed representation of nature. It was from the times of the Tacuina Sanitatis, illuminated manuscripts that catalogued plants and foods according to their therapeutic qualities, that nature as interpreted by Gothic artists working in Lombardy became an important source of inspiration. Nevertheless it is only in the 1500s that drawing and painting consciously become a part of scientific exploration: art found a reason to be, if you will, by becoming an impersonal scientific instrument. After signing, in 1592, the large painting on slate titled Gli Ambasciatori Fiorentini Ricevuti da Bonifacio VIII, hung on the right hand side of the tribune in the Salone dei Cinquecento in Palazzo Vecchio, the artwork that established, with the importance of the official commission, the painter's success in the Medici court, Jacopo Ligozzi qualified himself as a "miniator", a miniature painter- said with some irony considering the size of the painting . His declaration can be seen as a validation of the importance of the role and the profession of the botanical illustrator, role that he had been employed in up to that time in the court of the Granduca Francesco. Already in 1577 the famous Bolognese naturalist Ulisse Aldrovandi wrote a letter urging the Granduca to have his "excellent painter " do studies of the four "Indian" plants that he was sending him.
After an apprenticeship in his family's bottega, where he came into contact with members of the Hapsburg court seeing how the important illustrator Giorgio Liberale from Udine worked for the Archduke Ferdinand, Ligozzi later arrived in Florence as a 'miniator', probably after urging from the Granduchessa Giovanna d'Austria, Ferdinand's sister . In the first three years of his stay there the artist worked on a precious series of 146 paintings with plants and animals, paintings that are today in the Uffizi. There are many more, such as the 30 that are in the Biblioteca Universitaria in Bologna, paintings that Ligozzi sent to Aldrovandi. Still more are in collections all over Europe. All of these paintings are done in tempera on prepared paper and witness the high quality and precision that the maestro had reached in his comprehension of nature through drawing that was not abstract interpretation as was frequent in Florence. The artist's sensitivity to chromatic variation also showed his contact, in his younger years, with Venetian artists .
The drawing on display here, which shares a certain Mannerist taste for serpentine shapes with the paintings in the series today in the Uffizi, gives proof of his talent. It is a document of an artist who would become famous for his historical paintings and for his altarpieces, but who always remembered and showed in his style an acute perception of detail and an almost enameled pictorial surface on top of a sensitivity to light that is here evident in the refined outlines of the leaves.