Landscape with a Bridge, an Arch and a Family of Fisherman 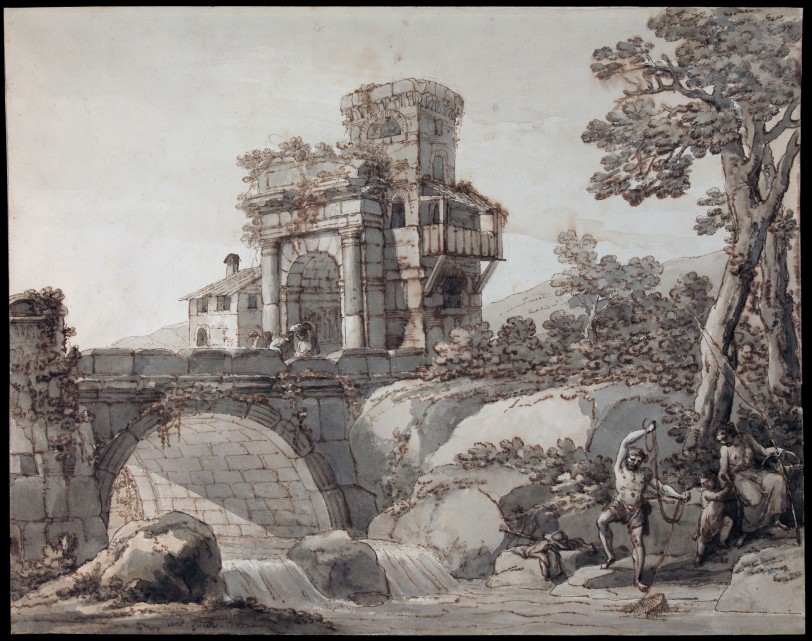 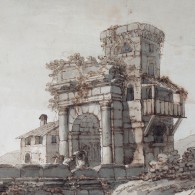 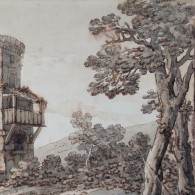 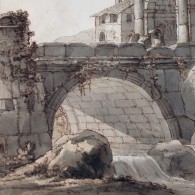 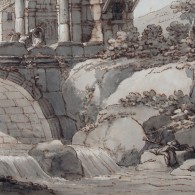 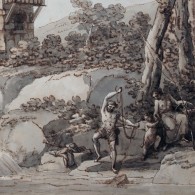 In a landscape that disappears into the distance along a diagonal, a family of fishermen is hauling in their net in a small cove in front of a rocky cliff. Above them on a bridge, four figures are looking over the scene while they chat under a triumphal arch.
This drawing, a kind of landscape made more human because of its neoclassical style, is dated 1787 and is signed by the Venetian artist Antonio Zucchi.
Coming as he did from a long line of etchers and scenographers, Zucchi had good schooling in the bottegas first of Francesco Fontebasso and then of Jacopo Amigoni. His first works are perfectly in tune with the Venetian Roccoco’: his altarpiece titled Santi Bonaventura, Pietro d’Alcantara e Sante Clarisse, done for the church of San Giobbe in Venice , or his Educazione della Vergine in the church of San Nicola in Komiza on the Isle of Lissa both showed an artist ready to follow established Venetian traditions without trouble. Then Zucchi met Robert Adam and Charles Louis Clérisseau took a decisive trip, voyage that is mentioned in Goethe’s Viaggio in Italia . The three went to Split to see the ruins of Diocletian’s Palace . Even though the etchings that illustrate the volumes of Adams’ Ruins should probably be attributed to Antonio’s brother, the aquatint etcher Giuseppe Carlo, Antonio was so impressed by the voyage and was so strongly influenced by Classical style painters such as Clérisseau that from that moment on he changed style as one can see in the altarpiece in San Tomà with the Incredulità di san Tommaso, a painting that Moschini already considered closer to Mengs than to the artist’s Venetian origins . After moving to Rome and marrying Angelica Kauffmann in 1781 he lived in the shadow of his wife’s talent. He began to specialize in landscapes with ruins. His most faithful collectors were his friends, artists and scholars such as Goethe, Tischbein, Canova, Herder e Hackert.
As Rodolfo Pallucchini has rightly said, in Zucchi’s work “the ruins of antique monuments are happily wed with landscape elements, and are always animated by pastoral figures: one could say that they recall Piranesi’s taste, lightened up with Arcadian elements taken from Zuccarelli" . The same is naturally true for the drawing here in question, draw along a cursive line that makes it similar to the Tuscan artist’s capricci, but made more solemn by the elements to the left that remember Classical art. This drawing is especially similar to a pair of paintings with Capricci today in the Ashmolean Museum in Oxford which are dated 1783-84 .